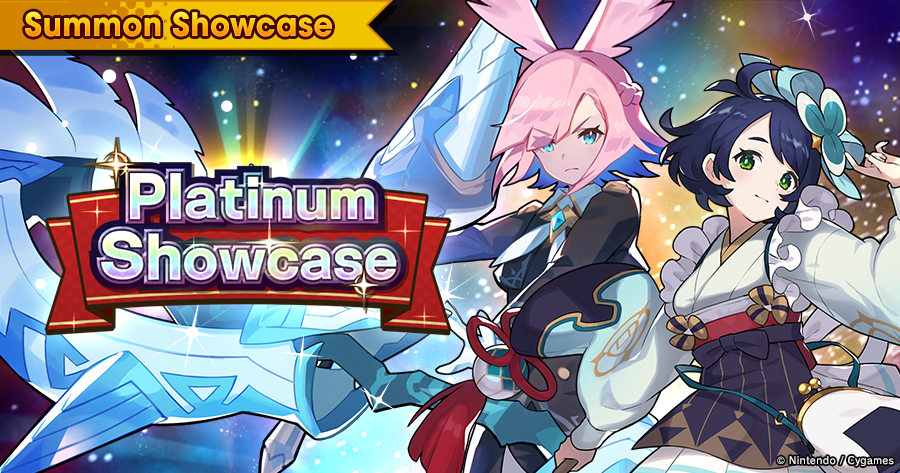 The Platinum Showcase started Oct. 21, 11 PM PT! A water-attuned 5★ adventurer is guaranteed to appear as the tenth summon in your tenfold summon. See the following notification for details. #DragaliaLosthttps://t.co/57vXFLlTro pic.twitter.com/QO7A4exzt8

Soul Benediction
Grants the user the “Gabriel’s Blessing” effect for
40 seconds. During Gabriel’s Blessing, the user’s
strength is increased by 50%, their defense is
increased by 20%, and damage less than 15%
of the user’s maximum HP is nullified.
These effects do not stack, and are lost upon
being attacked. This shield can stack
with ordinary shields.

Gabriel’s Covenant II
Inflicts the “Locked Sigil” debuff on the user at
the start of quests for 300 seconds, and grants the user
a unique force strike with two increasingly powerful
charge levels. Movement is possible while
charging, but the user will move more slowly.
Once their force strike is fully charged,
it will deal extra damage to frostbitten foes
and reduce Locked Sigil’s remaining time by
13 seconds if it connects.
The Locked Sigil debuff cannot be removed by
shapeshifting or incapacitation.
When the Locked Sigil effect wears off, the user
will be granted the “Sigil Released” effect instead,
allowing the user to perform special attacks that
restore 5% of the damage inflicted as HP to the user
and have a 40% chance to increase the user’s
energy level by one stage. This special attack is
activated by tapping the screen at the end
of a standard attack combo.
This recovery caps at 7% of their maximum HP.
By tapping the screen again during one of these
attacks, the user can immediately perform another.

Chef’s Special
Deals water damage to enemies directly ahead,
and applies one of the following effects based
on the user’s current cooking stance:

Hearty Helping
Applies one of the following effects to the entire team
based on the user’s current cooking stance:

Sashimi Stance: Increases critical rate by 10% for
15 seconds, and inspiration by two stages.

Tempura Stance: Adds 50% to the modifier applied
to critical damage for 15 seconds, and increases
inspiration by three stages.

Flurry Strength +20%
Increases strength by 20% when the combo count is
15 or higher.

Combo Time +4
Extends the window between hitting an enemy and
the combo counter resetting by four seconds.

・The stats shown here do not include increases or decreases due to abilities, and represent the adventurers at level 80 with 50 mana nodes unlocked, not the stats when first obtained.
Notes:
1. For more information about the Platinum Showcase, tap Summon on the in-game footer menu, then select the Platinum Showcase and check the Appearance Rates section and the Details tab of the Showcase Info section.
2. The Platinum Showcase will be available during other Summon Showcases. You can move between showcases by using the left/right icons on the Summon screen.
3. Performing a Platinum Showcase summon will not reset the appearance rate modifier increase for when a 5★ fails to appear after summoning ten times on another Summon Showcase.
4. For more information, tap Summon on the in-game footer menu, then select Showcase Info, Details, and see the Notes section.
5. Wyrmsigils cannot be earned from summoning on a Platinum Showcase.
Thank you for playing Dragalia Lost.