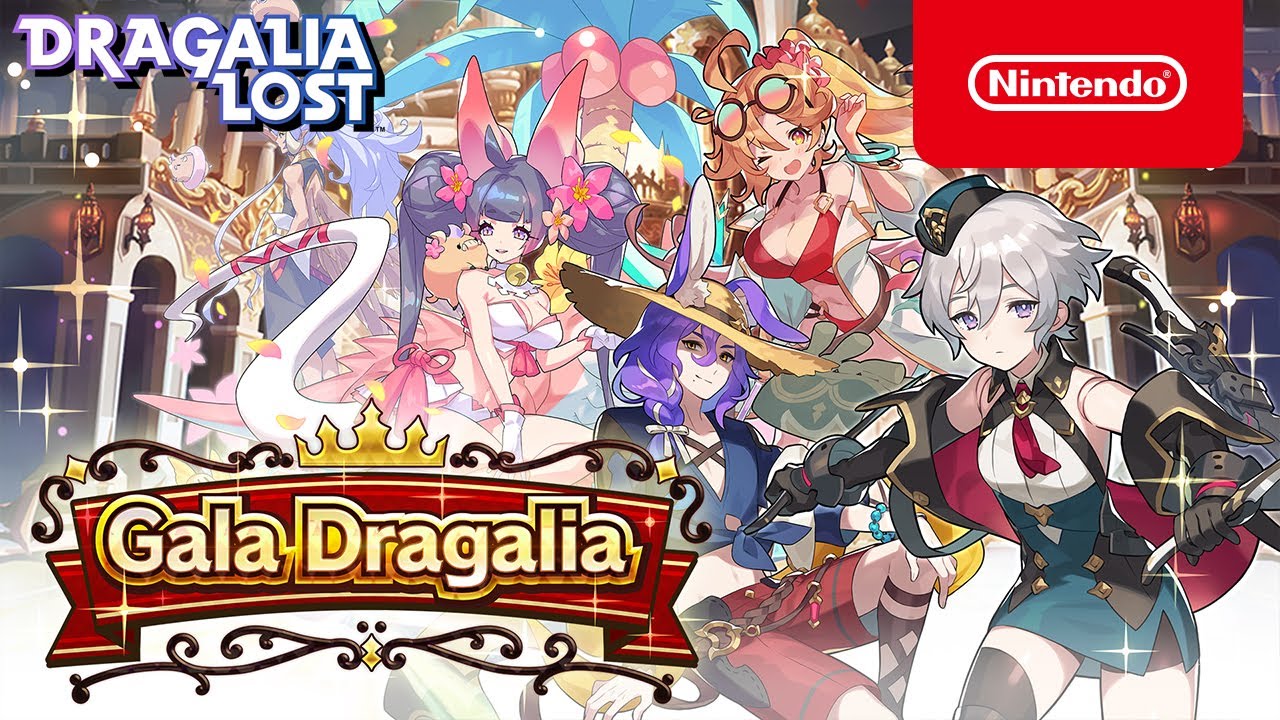 Gala Dragalia will start at 8:00 AM, Jul 30, 2020!
What are Gala Dragalia and Gala Dragalia Remix?
・The initial appearance rate for 5★ adventurers and dragons will be boosted to 6%, which is up from the standard 4%! If you get a 5★ summon or 5★ featured summon, the appearance rate will return to the initial 6%.
Note: The newly added 5★ adventurers Summer Sinoa (wind) and Summer Norwin (wind), as well as 5★ dragon Summer Konohana Sakuya (wind), will also appear in the next summon showcase.
Gala Dragalia event duration:
8:00 AM, Jul 30, 2020 to 7:59 AM, Aug 04, 2020
Get a closer look at the newly featured adventurers and dragon below.
Featured adventurers:

Standard Attack Damage +20%
Increases the power of standard attacks by 20%.

(Flame) Above 10 Hits = Wind Res +10%
If a team member is attuned to Flame:
reduces wind damage taken by them by 10%
when the combo count is 10 or higher.
Benefits your whole team.

Resonant Hearts II
Grants Laxi a charge gauge with three bars.
The charge gauge fills when standard attacks,
force strikes, and dash attacks are used,
and grants cumulative buffs to Laxi based
on the number of bars filled.
Filling one bar increases defense by 20%,
filling two bars increases attack skill damage
by 15%, and filling three bars increases strength
by 15%. Laxi’s charge gauge will not fill
when she has the Fig effect, and the gauge
will be reset and all of the above buffs lost
when the Fig effect is removed.

Mana Kiln II
Reduces susceptibility to stun and sleep by 100%.

Critical Frenzy II
Increases critical rate by 4% for every 15-hit combo
(up to three times per combo), and adds 4% to the
modifier applied to critical damage each time
one of the user’s attacks is a critical hit
(up to 10 times per combo). After activating,
this critical damage increase will not activate again
for one second. These buffs are removed when the
combo counter resets.

6
Deals wind damage to the target and nearby enemies,
draws them together, inflicts poison, and grants
the user one stack of Overload. Overload decreases
skill gauge fill rate for the Chrono Trial skill by 30%.
Overload can stack up to three times, and is not
removed by shapeshifting.

Bracing Summer
Consumes all stacks of Overload, and applies one
of the following buffs at random to the user for
each stack of Overload consumed:Increases inspiration by two stagesAdds 15% to the modifier applied to
critical damage for 30 seconds

Increases critical rate by 20% for 30 seconds

(Wind) Poison = User Water Res +8%
If a team member is attuned to Wind:
reduces water damage taken by them by 8%
for 15 seconds when they successfully poison
an enemy. After activating, this ability will not
activate again for 10 seconds.
Benefits your whole team.

Determination II
Increases damage dealt by the skill Chrono Trial
based on the number of Overload stacks the user
has. The first stack will increase damage by 20%,
with additional stacks increasing damage by 5%
each.

7
Deals wind damage to the target and nearby enemies,
and activates “Skill Shift” for both this skill and the
skill Ephemeral Love. Phases II and III both increase
the damage dealt by this skill. Phase IV does not
deal damage, and instead removes all stacks of
Doleful Spirit applied by Ephemeral Love IV
and energizes the entire team.

(Wind) Above 10 Hits = HP Regen VI
If a team member is attuned to Wind:
gradually regenerates their HP
when the combo count is 10 or higher.
Benefits your whole team.

Energy = Skill Haste III
Increases the user’s skill gauge fill rate as their
energy level increases. The maximum bonus, given
when the user is energized, is 25%.

Seashore Dance
Restores the user’s HP, and grants the user a
“Smiling Flower.” The Summer Flowers ability
buffs the user based on the number of
Smiling Flowers they have, up to a
maximum of six stacks.

(Wind) Summer Flowers V
If the user is attuned to Wind:
grants the user a “Smiling Flower” at the start
of quests, and grants an additional Smiling Flower
every 60 seconds, up to a maximum of six.
The user will receive the following buffs based
on their total number of Smiling Flowers.
One Flower: Increases strength by 40%
Two Flowers: Increases defense by 20%
Three Flowers: Increases skill damage by 50%
Four Flowers: Reduces water damage taken by 5%
Six Flowers: Grants an HP regen buff

・The stats shown here represent the dragon at maximum level, maximum bond, and fully unbound. They do not represent the stats when first obtained.
Note:
For more information about summoning, tap Summon on the in-game footer menu, then select Showcase Info and check the Details tab.
Thank you for playing Dragalia Lost.