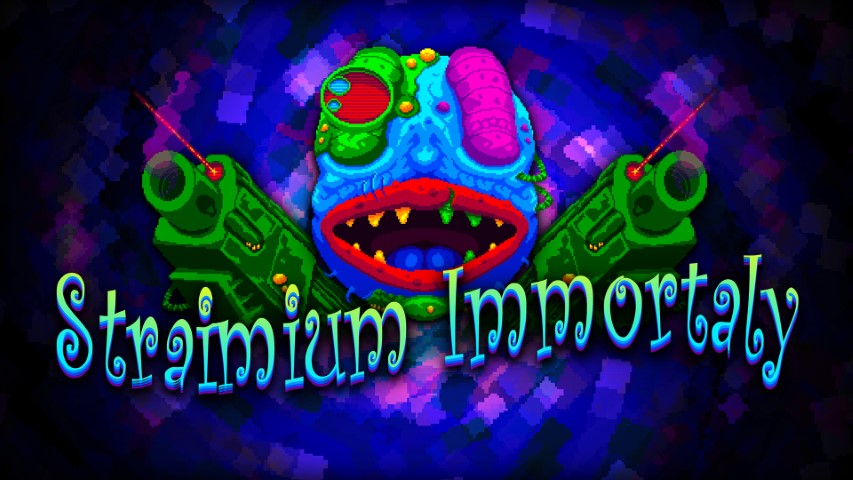 2 December, 2019 – Indie publisher Digerati and developer Caiysware are delighted to announce the surreal shoot ’em up action of Straimium Immortaly will be unleashed on consoles later this month. The frenetic follow-up to Caiysware’s Skelly Selest, Straimium Immortaly combines the developer’s unique pixel-art aesthetic with a mountain of loot to collect, upgrades to unlock, and weapons to wield.

Straimium Immortaly will be available to download 17/18 December on PS4 (NA/EU respectively), 24 December on Xbox One, and 25 December on Nintendo Switch.

Straimium Immortaly drops players into the Cubicus – a peculiar and perilous procedurally-generated realm of outlandish oddness where they must explore, power-up, loot, and shoot to survive!

Bosses and beasties abound in this bizarre and vibrant roguelite/shump/dungeon crawler hybrid. Armed with a jetpack and a smorgasbord of weapons and power-ups, Straimium Immortaly pits your lone warrior against the forces of the Queeni Emperess. Agility, precision, and loads of loot are your only means of surviving the Cubicus.

A world like no other: explore the bizarre, butts-hard procedurally generated and monster-filled rooms of the Cubicus
Otherworldly pixel-art: old-school pixels meet vibrant new-school style
Fly quickly, carry a big gun: from the Ionic Laser to the lightning-blasting Electra Casta, wield an arsenal of 25+ upgradeable weapons and 50+ items
Unleash ninja powers: discover and harness a variety of mysterious shinobi abilities
KO XL baddies: defeat a myriad of huge monstrous bosses in your bid to rid the galaxy of Queeni taint!
Your fight, your way: unlockable classes, mutators, cheats and hats. Level seeds and size options to customize your run. Boss Rush mode, Incursion mode, and more
A whole ton of stats: keep track of your progress through leaderboards, achievements, and compendiums of enemies, bosses, weapons, items, and more