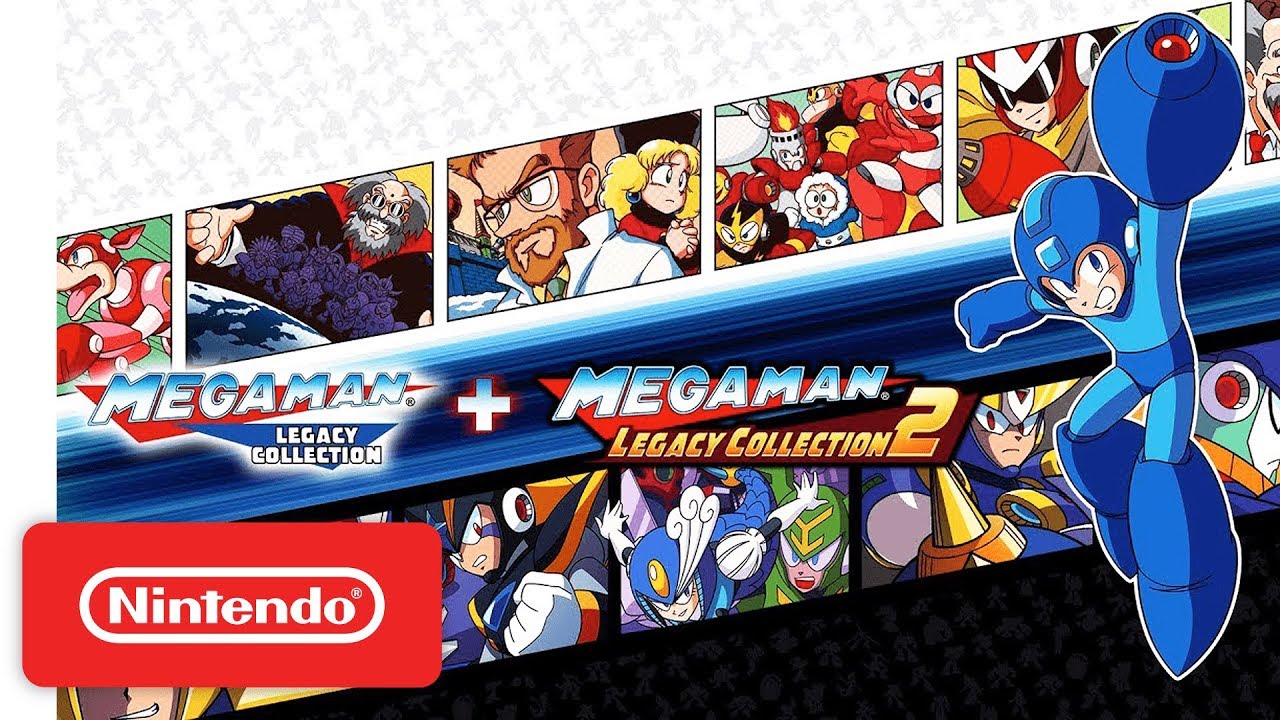 Mega Man Legacy Collection 1 + 2 slide on to Nintendo Switch on May 22nd!

The future has never looked brighter for the iconic Mega Man. As part of the 30th Anniversary celebration of the Blue Bomber and the upcoming Mega Man 11 in late 2018, we’re bringing ten of his classic adventures to Nintendo Switch! Complete with brand-new features for Mega Man Legacy Collection and exclusive challenges for Mega Man Legacy Collection 2, you can enjoy busting ‘bots anytime, anywhere when both collections arrive as individual digital downloads on the Nintendo eShop and as a combo package at retail in North America this May.

Leading the charge is Mega Man Legacy Collection, bringing together Mega Man’s original six adventures from the Nintendo Entertainment System. No need to dust off old cartridges to enjoy these classic quests as you jump, shoot, slide, and rush your way through masterfully crafted stages to reach the distinctive bosses of Mega Man games – the Robot Masters – in a bid to cut them down and claim their weapons as your own. With the ability to create a save state just about anywhere, you can retry tricky sections as much as you like without having to start over, or simply pick up where you left off when you’re playing at home or on the go.

Series veterans know that Mega Man is all about the heat of the moment-to-moment gameplay, though. Did you get a little too gutsy with a jump and fall in a pit? Were you not quick enough to escape a barrage of lasers? You can get back into the game in a flash thanks to the brand-new “rewind” feature! Just by holding a button, you can roll back gameplay, allowing you to pick up where you left off without missing a beat.

If you’re looking to dive into even more content, Mega Man Legacy Collection includes a giant gallery of concept sketches, box art (including the infamous original Mega Man box art), production art, songs from each game, and a collection of challenges that will put even the most dedicated fan of the Blue Bomber to the test. If you have a regular or golden Mega Man amiibo, you’ll also gain access to eleven additional fan-made challenges (from this contest), previously exclusive to the Nintendo 3DS version of the game and now making their console debut on Nintendo Switch! Do you have what it takes to come out on top? You’ll have to run like the wind to prove you’re the very best on the leaderboards.

Moving on from Mega Man’s early years, spring into Mega Man Legacy Collection 2 to see the beloved bot’s evolution and retro revolution in action. Mega Man 7 originally burst onto the scene on the Super Nintendo, updating the classic series with 16-bit graphics and a rich story that takes place just a few months after the previous game ended. Mega Man 8 kept with the tradition, bringing an astronomical upgrade with 32-bit graphics, an expanded storyline, and fully animated cutscenes that are well-known for their “quality” voice acting. Mega Man 9 and Mega Man 10 made a splash right as the 8-bit retro revolution was taking off, bringing the series back to basics with NES-style visuals while pumping up gameplay with additional playable characters: Mega Man’s sometimes friendly rival, Proto Man, joins the fight Mega Man 9, and returns alongside Mega Man’s nemesis, Bass, in Mega Man 10.

There’s plenty more to play after you’ve finished the main games, too. Both Mega Man 9 and 10 include all previously released DLC, giving you access to time attacks, bonus stages, and more. Already packed with a selection of art, music, and unique challenges for each game, using any Mega Man amiibo with Mega Man Legacy Collection 2 unlocks new challenges to put your platforming skills to the test. Think you can earn gold across a variety of challenges without striking out?

You can grab both collections for yourself digitally with Mega Man Legacy Collection for $14.99 and Mega Man Legacy Collection 2 for $19.99, or pick both up at retail in North America (MMLC on a cartridge and MMLC2 as a digital download) with an exclusive Mega Man 30th Anniversary cleaning cloth for $39.99 this May. Check out the official website for info on where to pre-order. With all ten classic titles coming to Nintendo Switch, it’s a great time to catch up or relive your favorite mega moments ahead of Mega Man 11, coming late 2018 to Nintendo Switch, PS4, Xbox One, and PC.