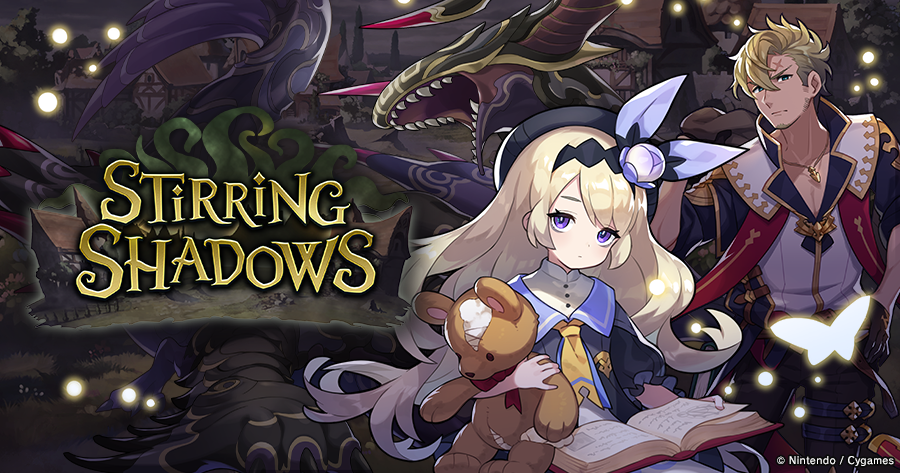 The Stirring Shadows summon showcase starts Oct. 18, 11 PM PT! Appearance rates will be increased for featured adventurers and dragons, such as the 5★ adventurers Lathna and Curran! #DragaliaLosthttps://t.co/BxEQn7VLJ1 pic.twitter.com/t80HeR9kRv

7
Deals shadow damage to the target
and nearby enemies. Poisoned foes
take extra damage. Continually tapping
the screen during the attack will unleash
additional blows, with up to a maximum of four.

(Shadow) Dragon Haste +20%
If a team member is attuned to Shadow:
increases their dragon gauge fill rate by 20%.
Benefits your whole team.

The Faceless God II
When shapeshifting, Lathna will transform into
Nyarlathotep regardless of what dragon she is
equipped with. Grants an HP regen buff for
20 seconds each time she shapeshifts.

7
Deals shadow damage to enemies directly ahead,
and reduces their defense by 5%.

(Shadow) HP Below 40% = Strength +15%
If a team member is attuned to Shadow:
increases their strength by 15% when
their HP is 40% or below.
Benefits your whole team.

Overdrive Punisher +13%
Increases damage to enemies in overdrive state
by 13%.

Moonlit Howl II
If the user is attuned to Shadow:
grants the user the “Bloody Tongue” effect
for 20 seconds when HP drops to 30%.
This effect grants the user a one-use shield
that nullifies damage less than 60% of their
maximum HP, and increases their strength by 30%.
These effects do not stack, and are lost upon taking
damage.

・The stats shown here represent the dragon at maximum level, maximum bond, and fully unbound. They do not represent the stats when first obtained.
Note: For more information about summoning, tap Summon on the in-game footer menu, then select Showcase Info and check the Details tab.
Thank you for playing Dragalia Lost.