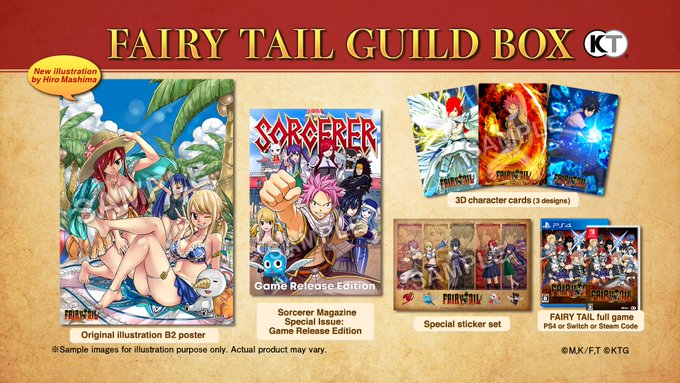 We have seen your excitement, DM enquires and the general question of:

"When can I pre-order this beautiful edition"

Strengthen Your Bonds, Learn New Magic, And Fight Together To Become The No. 1 Guild in this brand-new magical JRPG!

Demons, dark wizards, dragons, and cats. You’ll find it all as you start your journey in the land of Fiore and play through the adventures of Natsu Dragneel and Lucy Heartfilia as well as other eccentric members of the FAIRY TAIL mage guild on a fun-filled and thrilling quest. GUST Studios is creating the game under the supervision of author Hiro Mashima, promising a faithful recreation for the FAIRY TAIL world and its unusual inhabitants, including everything from magic to its iconic characters.

• Experience the exciting story – From popular fan-favourite episodes to original in-game episodes, players can experience the magical world of Earth Land and fight with Fairy Tail in the exhilarating story!
• Play as powerful mages from different guilds – Take on formidable foes as Dragon Slayers, summoners, shape shifters, enchanters, and other colourful mages from the top guilds of Earth Land!
• Grow and expand the guild together – Complete requests, strengthen friendships, and upgrade the guild’s facilities to increase the Guild Rank. The higher the rank, the more challenging requests are. Fight and prevail to become the #1 guild in the Kingdom of Fiore and beyond!
• Magic battles, Fairy Tail style – Wield fire and ice magic, summon spirits and weapons, control time, crush matter, use the Unison Raid, Dragon Force, Mode Change, and more – characters battle with their distinctive abilities from the comics and anime, faithfully recreated in 3D graphics!

ABOUT KOEI TECMO EUROPE LTD.
KOEI TECMO EUROPE LTD. is a publisher of interactive entertainment software for current generation consoles, handhelds and digital download content based in Letchworth, Hertfordshire, UK. The company is a wholly owned subsidiary of KOEI TECMO HOLDINGS CO., LTD., headquartered in Yokohama, Japan. KOEI TECMO’s best known for their signature ‘one versus thousands’ Warriors series, the fan-favourite Ninja Gaiden and fighting entertainment title Dead or Alive. Through collaboration with strong existing franchises, such as A.O.T. Wings of Freedom (Attack on Titan), has brought fan-favourite shows to life in video game form. The company’s desire for innovation and diversity has seen the creation of the critically acclaimed dark-samurai action title Nioh, which takes on new and unique gameplay styles. The company’s acquisition of GUST, developer of a variety of heart-warming titles, has seen their flagship Atelier series span generations of consoles and fans alike. More information about KOEI TECMO EUROPE LTD and its products can be found at www.koeitecmoeurope.com
Based on the manga “FAIRY TAIL” by Hiro Mashima originally serialized in the weekly SHONEN MAGAZINE published by KODANSHA Ltd. ©Hiro Mashima, KODANSHA/FAIRY TAIL Committee, TV TOKYO
©KOEI TECMO GAMES CO., LTD. The KT logo is a registered trademark of KOEI TECMO HOLDINGS CO., LTD.