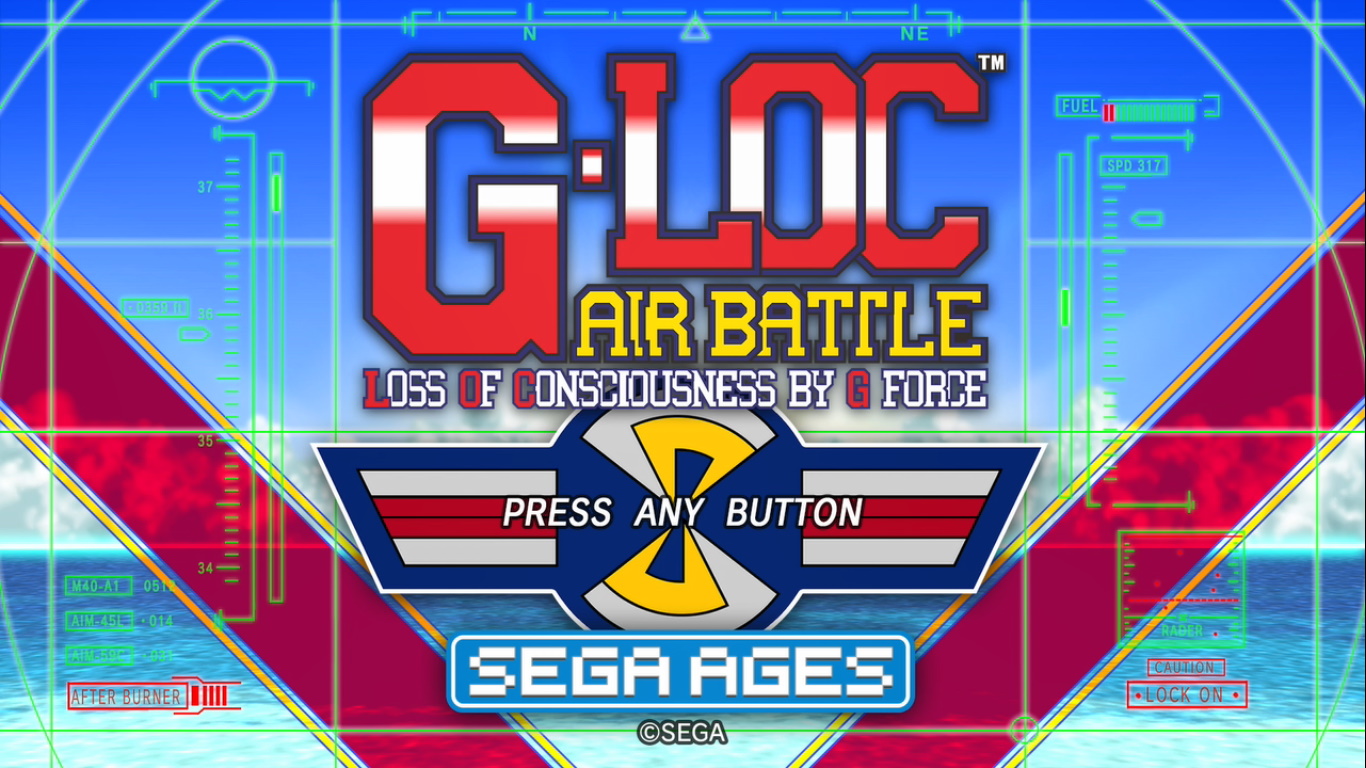 Get Ready to Experience the G-Force Impact!

IRVINE, Calif. – April 16, 2020 – Climb into the cockpit and take control of one the most exciting combat flight simulators of all time in G-LOC Air Battle when it joins the SEGA AGES lineup for Nintendo Switch on April 30, 2020!

There’s never been a better time to try out this high-octane arcade title thanks to the all-new features introduced in this enhanced release. Shoot your competition down the leaderboards with online rankings, recreate that feeling of the original hydraulic-powered arcade cabinet with a moving cabinet display (among other screen options), or increase those g-forces to the max with AGES Mode, which adds more enemies, more missiles, and a more powerful lock-on system. Finally, the rookies out there can make the skies a little friendlier (or scarier) with multiple difficulty options.
About SEGA AGES

SEGA AGES G-LOC Air Battle is ready to fire away for Nintendo Switch on April 30, 2020! Find out more by visiting our official website at https://segaages.sega.com/.
Dodge and weave your way through the treacherous skies as you take on a dangerous mission against an entire squadron of enemy pilots. Created by acclaimed designer Yu Suzuki, G-LOC Air Battle has you taking control of an experimental aircraft as you soar through the blue skies on a series of timed missions, sure to get the blood pumping and the adrenaline flowing.
SEGA AGES is a series of classic SEGA titles being released on the Nintendo Switch™. Developed by M2, the Japanese developer known for high-quality ports of classic games such as the popular SEGA 3D Classics series on the Nintendo 3DS™, SEGA AGES aims to bring prominent titles from SEGA’s legacy catalog to fans around the world. From a selection of home console classics to a multitude of perfectly-emulated arcade games, SEGA AGES gives fans the ability to build their own unique retro SEGA collection.

SEGA AGES originally debuted as SEGA Ages Vol. 1 Shukudai ga Tant-R, a compilation of enhanced arcade ports of Puzzle & Action: Tant-R and Quiz Shukudai wo Wasuremashita, released on the Sega Saturn in 1996 in Japan. Over time, the SEGA Ages series grew to encompass enhanced ports of dozens of games across multiple systems. The series also made an appearance in the West with SEGA Ages: Volume 1, a collection of enhanced ports of Space Harrier, Out Run, and After Burner II, released in 1997 on the Sega Saturn. Now, SEGA AGES is being rebooted on the Nintendo Switch™, delivering the most faithful ports of Sega Master System, Sega Genesis, and arcade games for the current generation. As you would expect from the retro geniuses at M2, these games will stay true to their original forms while incorporating new features that bring a refreshing twist to these classic titles’ gameplay. For more information, please visit segaages.sega.com.

About SEGA® of America, Inc.:
SEGA® of America, Inc. is the American arm of Tokyo, Japan-based SEGA CORPORATION, a worldwide leader in interactive entertainment both inside and outside the home.  The company develops, publishes and distributes interactive entertainment software products for a variety of hardware platforms including PC, wireless devices, and those manufactured by Nintendo, Microsoft and Sony Computer Entertainment Inc.  SEGA of America’s website is located at www.sega.com