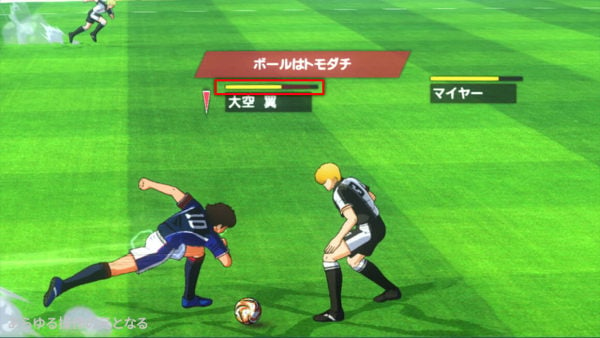 Every character has a spirit gauge, which is consumed by dashing and activating various moves that act as special attacks. How you effectively utilize this spirit will influence how the match develops. 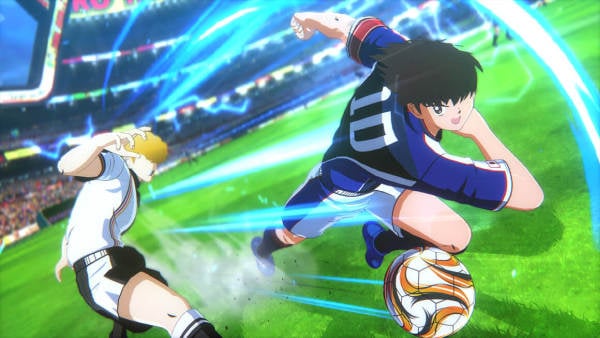 By consuming a fixed amount of spirit, you can activate “moves,” or special attacks representative of the Captain Tsubasa series. There are a wide variety of moves, from those directly linked to the goal such as shoot Moves, to dribbles and blocks. How you effectively utilizes these moves to score, as well as to defend your goal, makes all the difference between victory and defeat. 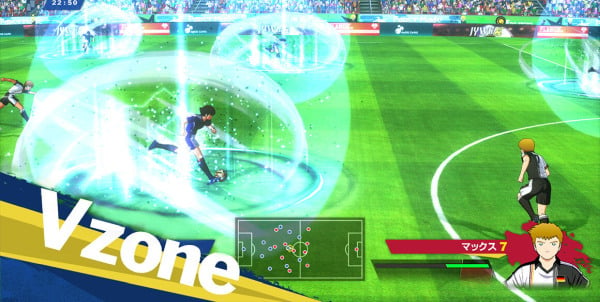 In Captain Tsubasa: Rise of New Champions, the team’s shared gauge will accumulate as you successfully perform actions that raise the team’s morale, such as overtaking the opponent with a dribble or stealing the ball. By building this gauge up to the maximum amount, you can activate “V-Zone.” When V-Zone is activated, every team member’s spirit recovery speed and kick gauge accumulation speed is accelerated for a fixed period of time, so the timing of when you activate it and the actions you take during activation will be a major influence on how the match plays out. Also, if the team captain has a special skill called a “Captain Skill,” further special effects may be applied. 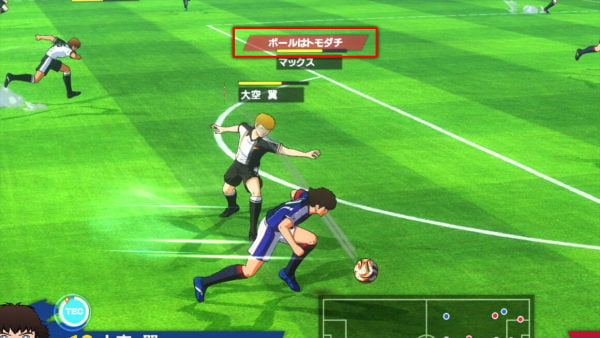 Each team member has a special skill that reproduces the unique character traits of Captain Tsubasa. These skills affect each characters’ stats and spirit, and have various activation conditions ranging from point difference to field position. Utilizing team members with skills in line with your own tactics is the key to victory. 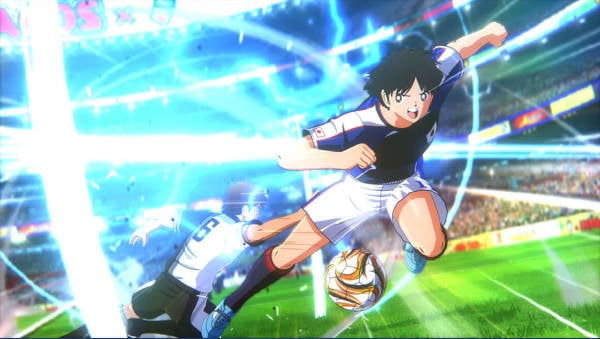 Use “dash dribbles” and “dribble moves” to fake out your opponent and quickly overtake them. By continuously overtaking your opponent, a buff effect called “Zone” will activate, making it easier to build up your spirit gauge and shoot gauge, allowing you to more quickly strike with a powerful shoot move. 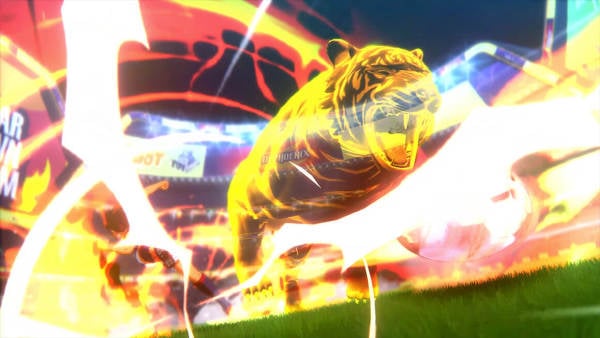 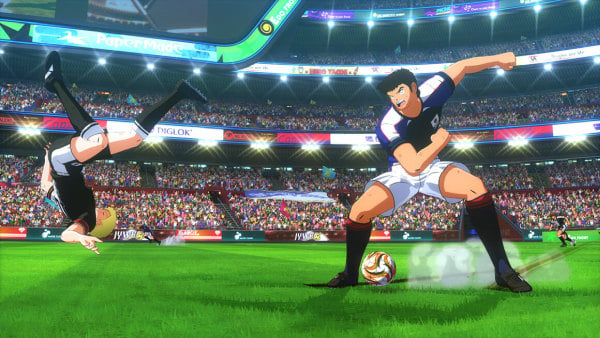 Depending on the opponent’s dribble pattern, approach them by “dashing” and use “tackle moves” to steal the ball. There are even some powerful tackles that keep the opponent down for a short period. 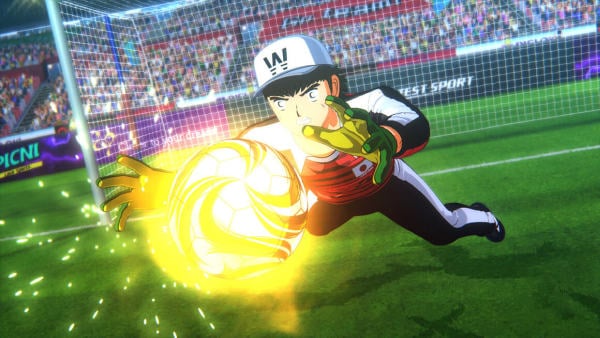 Goal keepers have an energy gauge system in order to reproduce the impenetrable force of the goalies that appear in Captain Tsubasa. Shooting and reducing the gauge will make it easier to score a goal. Additionally, some characters have a “super save” move that consumes the V-Zone Gauge and has a 100 percent chance of blocking a goal. 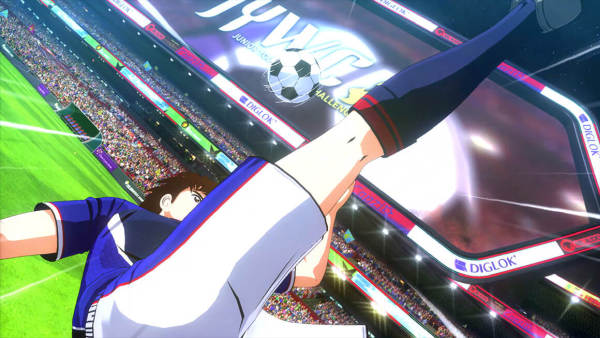 Depending on the character, they will automatically use a “block move” when the opponent uses a shoot move if they are in-between the shot and the goal. When a block move is activated, it is possible to block the shot or lower the reduction of the goal keeper’s energy gauge. 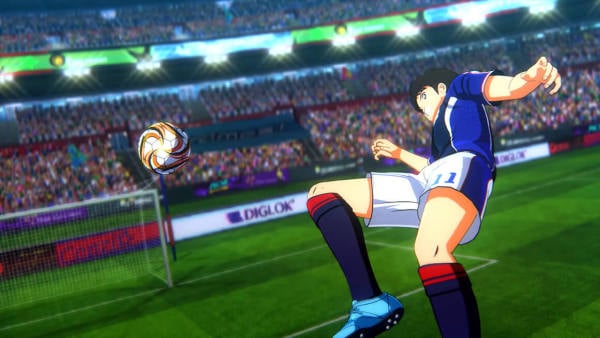 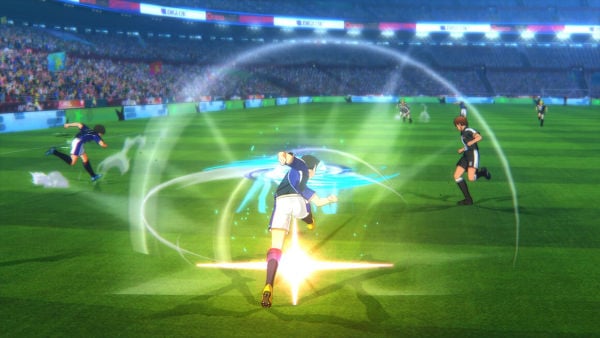 Depending on the character, you can use “long pass moves” in addition standard passes by building up a gauge. By building up the shoot gauge, the receiver can directly activate a shoot move during this move. Additionally, “cooperative pass moves” activated between specific characters can also be used to overtake multiple opponents.