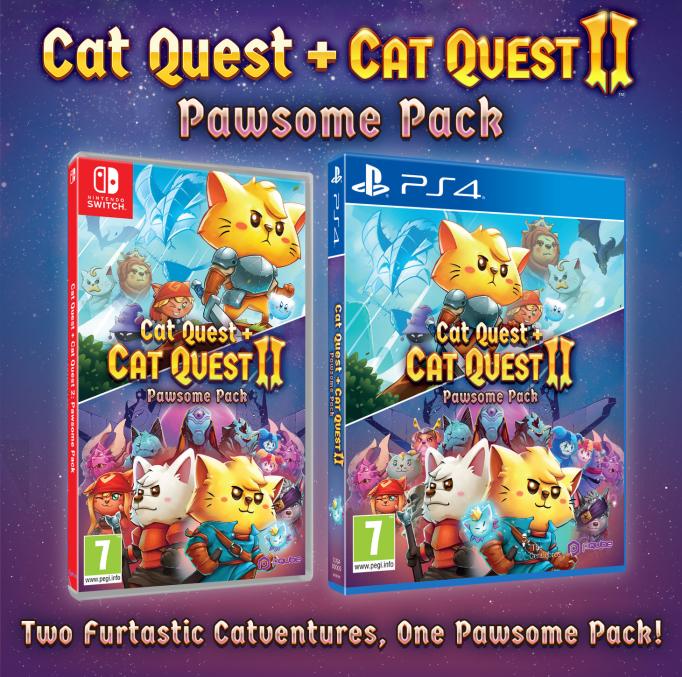 Coming to stores in Europe and North America this Spring!

PQube (London, UK) – February 12th, 2020 – PQube and Singaporean developer The Gentlebros are excited to announce the Cat Quest Pawsome Pack for Nintendo Switch and PlayStation 4! This furrmidable edition will include both Cat Quest and Cat Quest II. It will come to stores in Europe and North America this Spring.

Both 2D open-world action-RPGs are already available digitally for Nintendo Switch, PlayStation 4 and PC and have been received catceptionally well by players and press! Cat Quest II is also available for Xbox One!

Pre-orders are now available from the following stores and more worldwide:
Have a look at the furrmidable new trailer: https://youtu.be/nvYzcpNM3dE

The Pawsome Pack includes both games on one disc or cartridge, and will feature a reversible cover that is exclusively Cat Quest II for those who want to complete their set!

When Cat Quest made its debut in 2017, it took the world of indie adventures by storm! The adorable art style, clever quest, and combat design, as well as an infamous amount of cat puns, helped it become an instant fan favourite!
The much-awaited sequel did not take long to follow and introduced the most requested feature two years later: Cat Quest II, featuring two-person co-op multiplayer, expanded the universe with a whole new story, introduced dogs and their Lupus Empire and much more!
Choose your gear and spells, embark on exciting quests, explore the beautiful overworld and challenging dungeons with the Pawsome Pack this Spring!