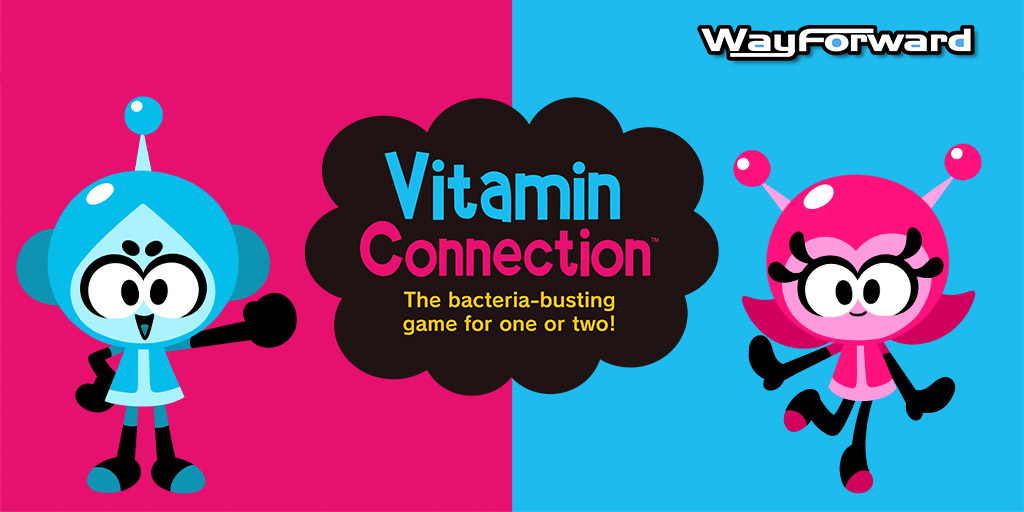 Prepare for a big dose of excitement delivered in a microscopic package with Vitamin Connection for Nintendo Switch! Developed by independent game studio WayForward and published physically by Limited Run Games, this Switch-exclusive one- or two-player action title will deliver thrills, laughs, and varied gameplay unlike anything else on the system.

In Vitamin Connection, players assume the roles of Vita-Boy and Mina-Girl and take control of the minuscule Capsule Ship to battle evil bacteria from within living organisms. By blasting subatomic foes with your Vitamin Beam, utilizing a special claw tool, and navigating maze-like stages, you’ll save the members of the Sable family – including the dog! – from a variety of hazardous and increasingly wacky predicaments. Each level also includes sub-games featuring rhythm challenges, Pong-like reflex tests, and more.

While the entire game can be played solo, Vitamin Connection also features an innovative, asymmetrical local two-player co-op mode, in which one player controls the Capsule Ship’s movement and shooting, while the other handles the ship’s rotation and aiming. Coordination and a connection between players are essential for success!

Vitamin Connection will initially be available exclusively as a physical release published by Limited Run Games, followed by a digital release from WayForward. Additional details about the preorder window, pricing, and release date will be announced at a later time. For more info, stay tuned to wayforward.com and limitedrungames.com.