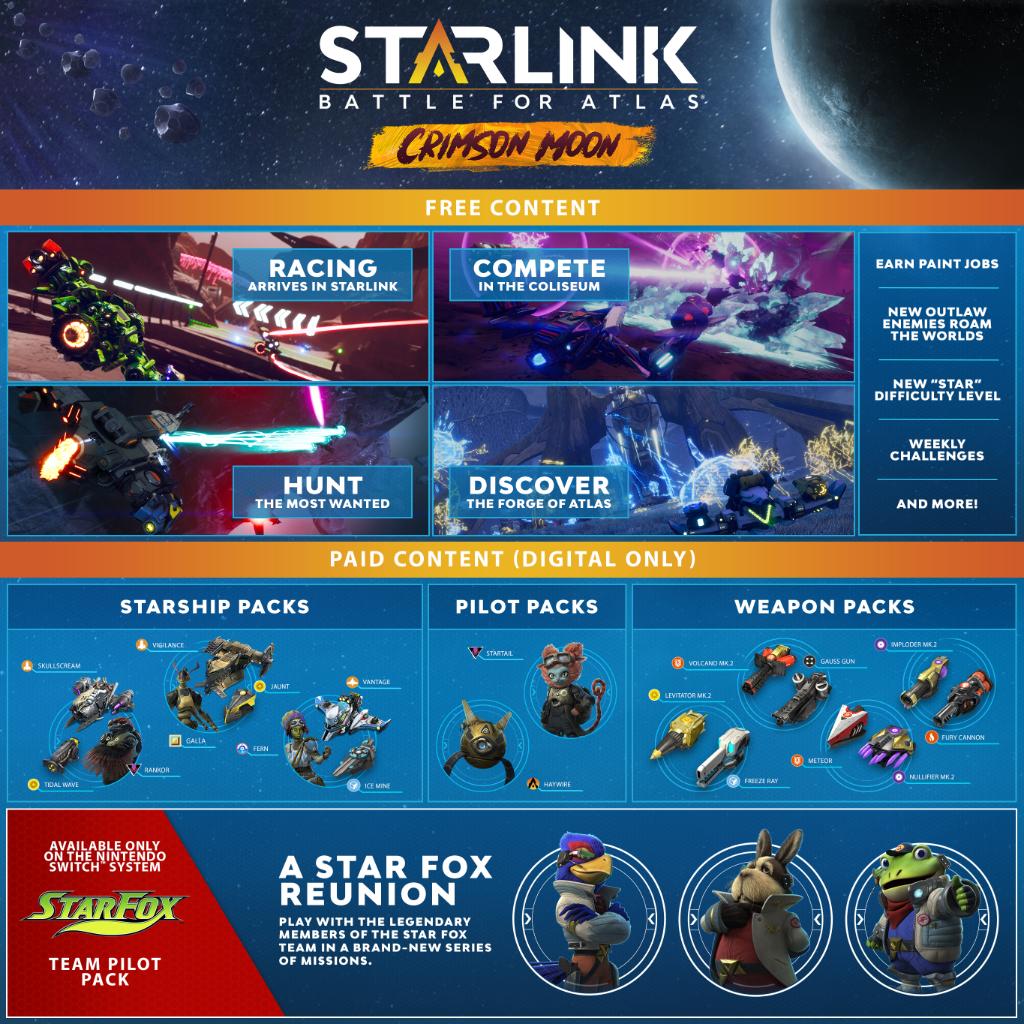 The Crimson Moon has decloaked in Atlas!
Discover this new location upon the completion of the ship modding tutorial in Act 2.

The Coliseum (Outlaw Faction Story)
Enter the Outlaw arena and face waves of enemies in the Crimson Coliseum! In order to access this activity, you need to complete the ship modding tutorial in Act 2. Visit the Fortune’s Rest outpost on the Crimson Moon and interact with the hologram billboard of Fortune, selecting the “Champion of the Outlaws”.

The Outlaws challenge you to compete in the Crimson Coliseum:
• Brawl mode
• Laserdrome mode
• Champion Battle mode
• Gauntlet mode (not for the faint of heart)

Atlas Most Wanted (Prospector Faction Story)
Hunt down the most wanted Outlaw criminals and claim their bounties by checking in with the Prospectors! This activity is unlocked after completing the “Building Blocks” objective in Act 3. Visit the Fortune’s Rest outpost on the Crimson Moon, interact with the hologram billboard and select “Atlas’s Most Wanted” to unlock Bounty Hunting.

The Forge of Atlas (Expedition Faction Story)
Investigate the secrets of Atlas by solving ancient puzzles and discover the location of the Celestial Anvil in a series of Expedition activities! It unlocks upon completion of the ship modding tutorial in Act 2. Interact with the hologram billboard of the Fortune and select “The Forge of Atlas” to begin the Expedition Story.

RACES
Visit the Fortune’s Rest outpost on the Crimson Moon, interact with the hologram billboard and select “Racing” from the “Crimson Moon Missions” to compete against the most dangerous pilots in the star system! Make sure to complete the ship modding tutorial in Act 2 in order to unlock this activity.
There are four racetracks to test your speed and handling:
• Phantasm Chasm
• Paradise
• Wardens’ Pilgrimage
• Foundry of Kings

PAINT JOBS
Customize your starship with paint jobs, obtainable after completing activities in the Crimson Moon update!
Paint jobs can be applied through the Ships Mods screen.
There are over 100 Paint Jobs to collect – can you find them all?

NEW ENEMY UNITS
Prepare to face new outlaw enemies! Unlocked in Act 3, these enemies will occasionally spawn from the outlaw turrets at the shipwrecks.
• Wanted Outlaws have escaped imprisonment
• Outlaw Sloop Tanks have been wreaking havoc on the Expedition across Atlas
• Outlaw Battle-Mechs have been destroying Prospector settlements across Atlas

NEW “STAR” DIFFICULTY AND ENEMY SCALING
We are introducing a new difficulty level which will display stars instead of the enemy level. Enemies will be scaled according to the equipped pilot’s level.

LEADERBOARDS
Set your best score and compare it with other players with the online Leaderboards! In order to access the Leaderboards, sign in to Ubisoft Club and check the Social Tab in the main menu. You can find the Global and Friends Leaderboards, which are available for races and Crimson Coliseum modes.

WEEKLY CHALLENGES
Complete a series of weekly challenges and earn a variety of rewards, including time-limited trials of different digital weapons! Make sure to sign in to Ubisoft Club, navigate the Social Tab and accept the three weekly challenges!

RE-MAPPABLE CONTROLS ON PC | CONTROLS SWAP ON CONSOLE
One of the most requested features from the Community, we’re pleased to announce you can fully customize controls on PC.
On console, players will be able to swap controls for Boost and Hyperdrive from the options menu.

NEW STAR FOX MISSIONS (NINTENDO SWITCH EXCLUSIVE) *Requires purchase*
Play as Falco, Peppy and Slippy in a series of missions to hunt down Star Wolf’s lieutenants Andrew, Pigma and Leon, after completing the main Star Fox story missions. Go to Fortune’s Rest outpost on the Crimson Moon, interact with the hologram billboard of Fortune and select “A Star Fox Reunion” in order to start!

BUG FIXES
• [Switch] Fixed Cargo Shuttle wreckage not appearing in game but shown on map.
• [All Consoles] New Imp Hives will spawn even if the player has destroyed all the imp hives at 100% exploration on every planet.
• [All Consoles] Various other bug & crash fixes.