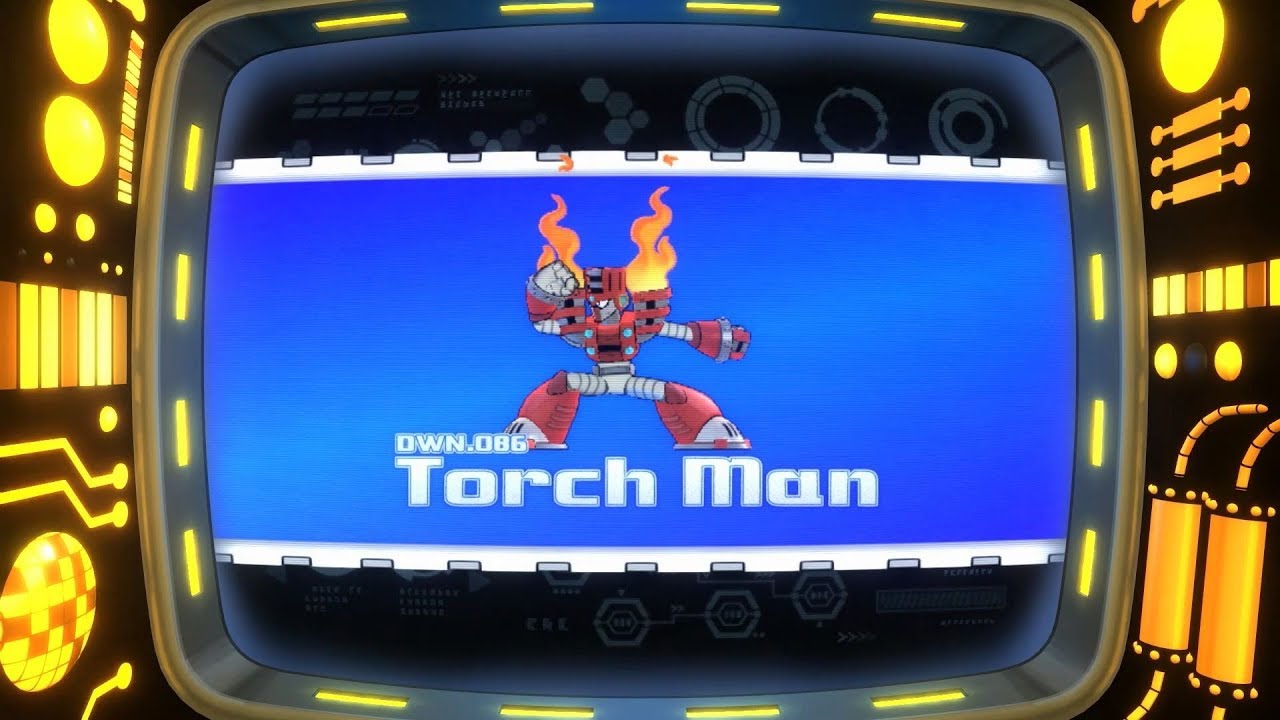 For our last update we revealed Blast Man and his volatile theme park, but the surprisingly cool-headed Torch Man trades out the densely packed corridors of an abandoned movie studio for a lush forest and campsite that he’s turned into his personal training grounds to hone his “Fist of Fire” technique. The dense foliage may seem like a pretty unusual choice for a robot whose shoulders are quite literally ablaze, but before Torch Man turned evil, he used to teach campers about fire safety. What irony!

Starting at the edges of a campsite, your idyllic walk in the woods is quickly interrupted by the many robots littering the forest. With enemies both out and about under a twilight sky and hiding away in tents propped up along your path, you’ll have to watch your step navigating the platforms and perils scattered around the stage. Further complicating things are heavily forested areas, preventing even the faintest moonlight from shining through and making platforms impossible to see. Fortunately, some friendly-looking lantern-shaped owls can help light your way, making it easier to see where you’re headed. How helpful! Unfortunately, they also attempt to drip fiery globs of gas on to Mega Man, making it that much harder to get where you’re going. How… awkward.

About halfway between you and your mission to douse Torch Man is an idyllic scene of Metalls gathered around a bonfire. It’s interesting seeing so many of them not hiding under their helmets – maybe they’re only shy when Mega Man is nearby. The peaceful scene is quickly shattered by Sparkey, a flaming turkey that’s so fired up, the blaze on its back will absorb your Mega Buster shots! Erratically jumping around the arena, this flaming fowl lays eggs that hatch into smaller robots, so you’ll have to watch your feet and put the Speed Gear to good use while focusing fire – or rather, attacks – on its vulnerable areas. Once this mid-boss has cooled off a bit, unleash everything you’ve got to roast it for good.

There’s a lot more to Torch Man’s stage as well, with devious mazes to navigate and tricky platforms standing in your way as walls of flame bear down on you. If you’re starting to feel the heat, Rush is just a button press away! Use Mega Man’s faithful robot canine to bounce up and away from difficult enemies, and activate the Speed Gear to give yourself a bit of extra time so you don’t wind up charbroiled.

When you finally catch up to Torch Man, the woods ablaze behind him (nobody told him only he can prevent forest fires), you’ll have to deal with much more than a bit of fire here and there. Torch Man is surprisingly nimble, showing that he’s not just a disciple of fire, but a “Torch-jutsu” martial arts master as well! Time your jumps and slides well to dodge fireballs and maneuver your way around Torch Man’s red hot kicks while getting attacks in. Don’t drop your guard, or else you might find yourself at the mercy of this Robot Master’s fiery spirit when he loses his temper.

Stamping out Torch Man will grant you Blazing Torch, a weapon that diagonally fires a ball of red-hot fire into the air! Just like the Robot Master this weapon comes from, each flaming ball comes crashing back down as a searing projectile, reminiscent of Torch Man’s blazing kicks. Using the Power Gear, you can supercharge the move to turn up the heat and fire off three projectiles at once!