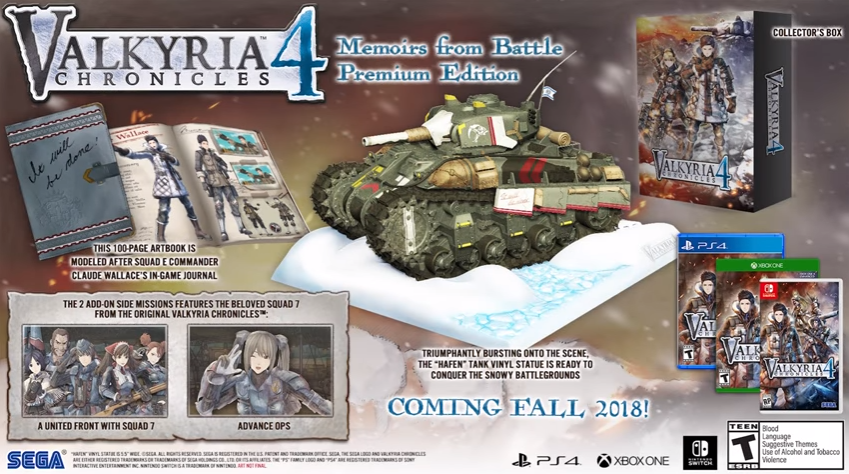 IRVINE, Calif. – May 23, 2018 – Attention – Squad E is reporting for duty! Get to know your squad (and their respective classes and motivations) in the new Valkyria Chronicles 4 Squad Trailer, featuring the ever-determined leader Claude Wallace, brilliant inventor Riley Miller, and brave rescue dog Ragnarok. Join the Ranger Corps’ Squad E in Valkyria Chronicles 4, where intense battles, bitter snowstorms, and tales of sacrifice await you on the East Europan Imperial Alliance borders this fall.

Take the fight to the Empire with the Valkyria Chronicles 4 “Memoirs from Battle” premium edition, and dive into two new adventures with your favorite Squad 7 characters from the original Valkyria Chronicles. This special edition release (MSRP – $99.99) comes equipped with an exclusive artbook themed as Claude’s travel journal from the game and a replica of his mighty tank, the Hafen. Arm yourself for the battle ahead by pre-ordering the “Memoirs from Battle” premium edition today at http://valkyria.sega.com!

Exclusive to the Valkyria Chronicles 4 “Memoirs from Battle Edition”*:

*Squad 7 DLC missions are available immediately through a download code included in the “Memoirs from Battle Edition.” They will be available as an add-on item on all platforms around the game launch.

Valkyria Chronicles 4 will be available on PlayStation®4, Nintendo Switch™, and Xbox One™ platforms in the Americas and Europe in Fall 2018. The game has been rated T for Teen by the ESRB for PS4™ and Xbox One™. Rating Pending for Nintendo Switch™. Please visit the official website for more information: http://valkyria.sega.com.