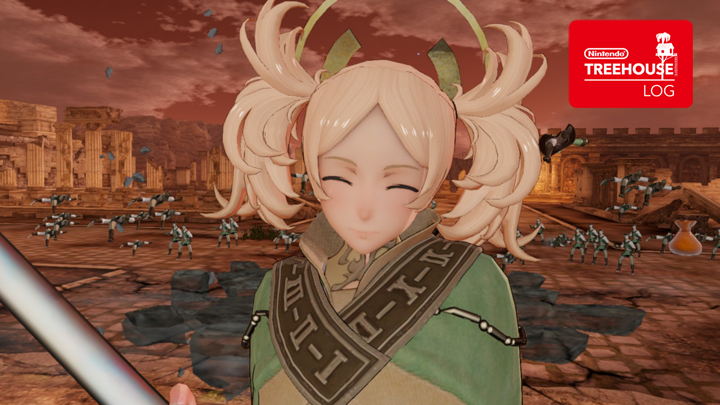 Hi, everyone! March marks the release of the third and final DLC pack for the Fire Emblem Warriors game, featuring Fire Emblem Awakening characters. Owain, Tharja, and Olivia join the fray, bringing even more play styles, skills, and strategic possibilities to the battlefield on March 28th, 5:00 PM Pacific Time. Details after the jump!

I imagine they’re having a conversation like this… Owain: We must fight, so sayeth I, the fell hero, Owain! Tharja: Hmm… I suppose death comes for us all eventually. Olivia: Um, fight? Is that like dancing?

First up in our roster is Owain. Or, as he’d put it, “Owain, the hero of an epoch, one truly without equal, steward as he is of the exalted blood of heroes.”

He goes by many names. He also names many other things. And doesn’t your army need an official Burning Lexicon of Nomenclature?

He wields the legendary Mystletai–…er, Missiletainn, which is a character-exclusive weapon you can unlock by playing through his History Map, “Scion of Legend.” (Which, incidentally, bears the same name as Owain’s recruitment paralogue in Fire Emblem Awakening. During that battle, an NPC gifts him the blade, which he mistakes for the divine blade Mystletainn that Eldigan wielded in Fire Embem: Genealogy of the Holy War, much to the poor NPC’s befuddlement.) On his new History Map, take his skill “Resonating Power” for a spin. It boosts damage dealt based on how close the unit’s Strength and Magic stats are, and… Wait a minute…

Owain is a great swordsman, but his true strength lies in his powerful techniques, like “SACRED STONE OF STRIIIKE,” “BLAZING BLADE OF DOOM,” and “STEEL OF THE RADIANT DAWN!” (WITH CAPS!!!!)

Owain is constantly making references to other games in the Fire Emblem series. The Fire Emblem Sacred Stones game is my favorite GBA entry, actually…

Along with Owain, we have two fabulous ladies joining the fray, the first of which is Tharja, who wields the skill Vengeance.

A preview of Tharja’s Warrior and Awakening Specials.

Vengeance functions similarly to how it functioned in Fire Emblem Awakening: it increases damage inflicted in proportion to remaining HP. In Fire Emblem Warriors, however, the unit’s HP will slowly drain while they have this skill equipped, so there is a bit of a risk and reward system at play—do you want to keep the unit’s HP low, for maximum damage input, and risk losing that unit? There are some Crests that can help units become extremely powerful with this combination, e.g., the Prayer Crest that helps units survive mortal blows, or taking advantage of Dual guard from pairing up units. So, have fun strategizing how you want to put this skill to work!

Tharja also brings a bit of a…er…dark charm that some of our resident warriors are sure to appreciate.

Finally, we have Olivia, the ever-shy but dazzling dancer. Her skill is Galeforce, which, in Fire Emblem Warriors, fills the Warrior and Awakening gauges when defeating strong enemies. Olivia also comes with a natural “Dance” ability that you can activate with the X button, which functions much like Azura’s Song ability. Dance will fill the Warrior and Awakening gauges of allies in the vicinity, while raising Olivia’s bond points with them at the same time. Let’s fill up those gauges!

Olivia is as powerful as she is shy.

One of the rewards for Olivia’s History map, “Caravan Dancer,” is her exclusive weapon, “Olivia’s Blade.”

Xander knows a spectacular dancer himself.

Comparable to other DLC Packs for Fire Emblem Warriors, new costumes for Chrom, Lissa, and Cordelia will be available as well.

Chrom looking quite royal in his Exalt costume.

Cordelia rocking her Dark Flier costume. A timely addition, given that DLC 3 brings Galeforce, which is a skill that can be learned in the Dark Flier class.

Last but not least, all Fire Emblem Awakening characters will get broken armor models. The model will differ depending on a character’s costume, so check those out if you like playing with the Armor Break status on. Below is a sneak peek at the new models.