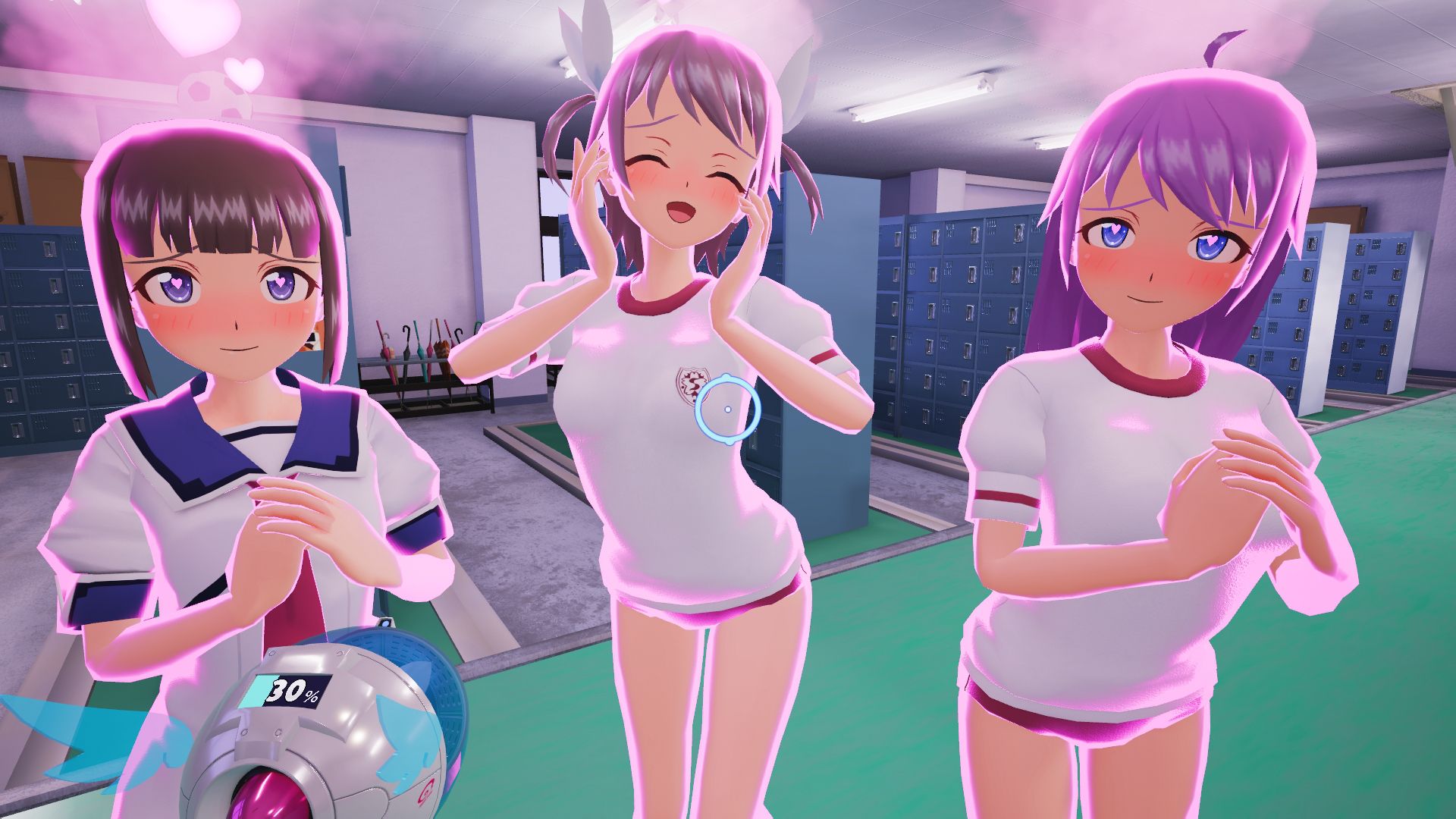 Body parts that display reactions like “Haa” and “Kyun” through repeated gun sighting are the girls’ weak spots. By shooting at their weak spots, your shot will become an “Ecstasy Shot” and you can achieve ascension with a single shot. By ascending all of the girls in the area, a symbol in the shape of the player will appear on each map. By shooting the symbol, you can move to that location. There may also be cases where multiple symbols appear, so check out your surroundings and choose the direction you want to take. There may even be hidden symbols. In cases where it is difficult to shoot a girl due to obstacles, you can stand on your toes, squat, or peer left and right. By shooting at the red letter of a faraway girls’ Confession Words Attack, all of the letters will simultaneously be destroyed. Also, you can use your zoom to aim more easily at faraway girls. When a Girl is Pushed Down

By shooting a girl that has been pushed down, she will offer resistance. If you shoot her a lot and make her flinch, she can escape from her restraint. How to Defeat Demon Girls

Girls with Mini Demons attached to them are called “Demon Girls.” Since shots are less effective against them compared to shots against ordinary girls, and they do not have a weak spot while protected by the demon’s aura, either aim directly for the Mini Demons or spam the girl with shots to tear off the Mini Demons. By removing the Mini Demons, the girl will revert to her original state. You can shoot and kill the Mini Demons you remove or suck them up with the Demon Sweeper. By sucking up Mini Demons, you can get tons of Repel Points. Furthermore, the Confession Words Attacks of Demon Girls with high-rank Mini Demons attached to them include skull-shaped “Bomb Letters.” If Bomb Letters are sucked in by the Demon Sweeper, it will spontaneously discharge and become unusable for a fixed period of time, so be careful. By obtaining “Demon Sweeper Modding Parts” as rewards for completing requests, Chiru (one of the heroines) can upgrade the Demon Sweeper at your house. An upgraded Demon Sweeper can enter “Hyper Mode” with a long button press, and suction during Hyper Mode is powerful enough to tear off the girls’ clothes. The girls whose clothes you tear off will ascend in embarrassment. That is what we call “Undressing Ascension”! By looking into the eyes of a girl you have zoomed-in on, the gun sight will change into a heart gauge. By continuing to make eye contact in order to accumulate the gauge, the girls will change to an “Eye-Heart State.” When this happens, the girl’s whole body will become a weak spot, and shooting her will envelop and ascend the girls around her. This is what we call “Eye-Heart Ascension”!