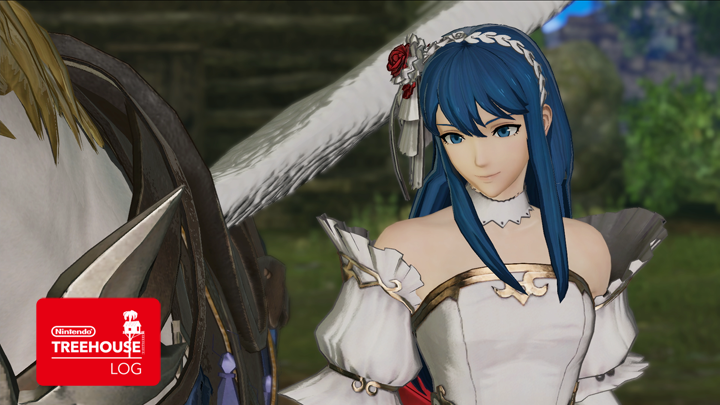 Navarre is a prickly swordsman who prefers the sole companionship of himself. Appropriately, his skill is Lone Wolf, which increases his damage output when he’s not paired up with another unit. This skill can come in handy in chapters where map control is important, and you can’t afford to pair up too many of your units for fear of bad map coverage.

He does have one weakness, however— if you’re a fan of Fire Emblem: Shadow Dragon, you will know that Caeda has dirt on him.

You must have Caeda talk to Navarre to recruit him in Fire Emblem: Shadow Dragon, which is how Caeda finds out about this. It’s good to see that continuity in Fire Emblem Warriors.

Next, with the addition of Minerva, we get another axe-wielding princess on wyvern-back. Minerva’s impact on the battlefield will be big, as her skill, Iote’s Shield, nullifies enemy effectiveness—this is a huge boon for a flying unit who would otherwise suffer a critical weakness to bows.

With enough materials to use at the Crest Shop, other characters will be able to take advantage of this skill, too, which increases the utility of your whole army. All Pegasus and Wyvern Riders, rejoice! This can also help Corrin and Tiki avoid those pesky Dracoslayer weapons and protect cavalry units from Mountslayers—you get the idea.

Finally, the third newly playable character is Linde, a bright (pardon the pun) mage who wields the Aura tome. Her skill is Quick Wit, which allows critical hits to fill the Awakening gauge regardless of weapon match up. Since magic is not included in the main weapon triangle of Sword – Axe – Lance, this skill can help mages like Linde build the Awakening gauge faster.

Each of these characters comes with a new History Map scenario, just like the Fire Emblem Warriors DLC Pack 1: “A Brush in the Teeth” featuring Navarre, “Princess Minerva” featuring Minerva, and “Knorda Market” featuring Linde. These three maps represent the three chapters during which Navarre, Minerva, and Linde could be recruited in the original game. Fans who have played through the original game might recognize some of the dialogue…

…though with in-character twists on those lines, of course.

There are some new weapon attributes that will be debuting with the DLC as well. The first of these is Statflip, which is a tricky little attribute that will flip a character’s Attack and Defense, as well as their Magic and Resistance stats. This means that tanks, who have heavy defensive stat growths, can now become powerhouse attackers. For example, the ever-adorable Elise can potentially become your strongest mage in the game with this attribute.

Notice how the Resistance stat is highlighted while a Statflip Tome is equipped.

Statflip is similar to an existing weapon attribute, Topsy-Turvy, which switches a different set of parameters: physical and magical attack power. What if you put both Statflip and Topsy-Turvy in one weapon? Can you guys guess what might happen?

Ta-da! Some fun ways to switch up your playstyle.

There are two other new weapon attributes, “Genpeer” and “Gencross.” What could these do? Find out when you try out the DLC content for yourself!

Some other goodies you can get from this DLC include the Bridegroom costume for Marth, Bride costume for Caeda, the Vibrant Dress for Tiki, and Swordmaster for Lyn. Also, all the Fire Emblem: Shadow Dragon characters will also get armor-break models, as will Lyn and Celica.

Nothing beats defeating enemies in style. And with that, happy soon-to-be Valentine’s Day! Until next time.