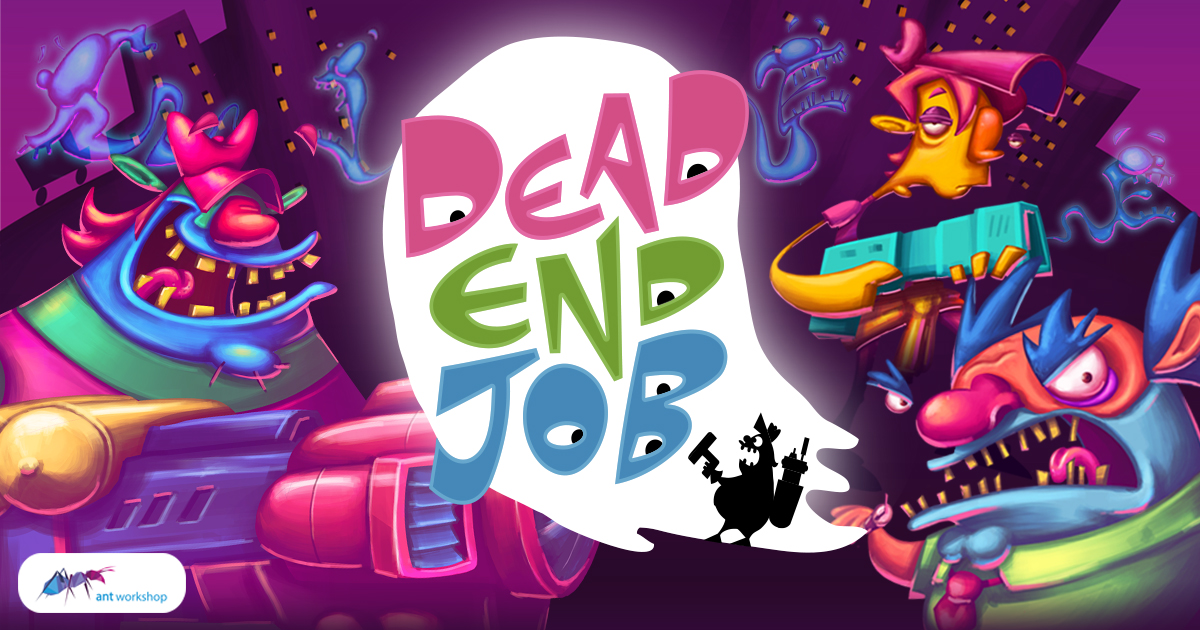 Blast Ghosts on the go! Dead End Job is coming to Nintendo Switch™

Talking about bringing Dead End Job to Nintendo Switch, Ant Workshop’s Founder Anthony Gowland said, “Ever since I first saw the Switch announcement I wanted to get Dead End Job on the platform as the crazy cartoon visuals and gameplay felt like a perfect fit, and after the fantastic reception we’ve had from Switch players with Binaries it would be silly of us not to! I can’t wait to see someone blasting ghosts and earning as much money as they can for The Man while on their daily commute , how many other cartoon shooters can you think of with that ironic symbolism?”

Also releasing on PC, Xbox One and PlayStation 4, Dead End Job merges the frantic, addictive, highly replayable gameplay of a procedurally generated twin-stick shooter with the iconic look of a 90s cartoon.

In Dead End job, you take on the role of Hector Plasm, a worker at Ghoul-B-Gone – the #1 experts in paranormal pest control. Blast ghosts and then suck them up using your trusty vacuum pack, as every ghost you catch, citizen rescued, and job completed is added to the client’s bill.

Literally haunted by your former partner-cum-mentor who didn’t come back from a job one night, they’re training you up to earn the hallowed status of “Employee of the Month” when they claim you’ll be ready to avenge their death by taking on the mythical ghoul that killed them.

Have you got what it takes to be the best at putting pests to rest?

Dead End Job features stunning cartoon-quality high resolution artwork by Joe Blakeston (Aardman, BBC and RSC), inspired by favourites like Ren & Stimpy. As well as an original soundtrack by the award-winning audio designer Will Morton (Grand Theft Auto series). The addition of Twitch integration allows viewers to help or hinder the streamer by choosing their powerups. Plus Dead End Job features drop in/drop out couch co-op so you can gather ghouls together.

Ant Workshop is an independent game developer based in Edinburgh, Scotland. Founded by ex-Rockstar Games Lead Designer Tony Gowland in 2015 to focus on developing original IP and interesting games with an off-beat sense of humour.

The first major game release from Ant Workshop, Binaries, was nominated for a BAFTA ‘Best Game’ award. Ant Workshop was also nominated in the ‘Best Micro Studio’ category in the Develop Awards 2017.

© 2017 Nintendo. Nintendo Switch and Joy-Con are trademarks of Nintendo.