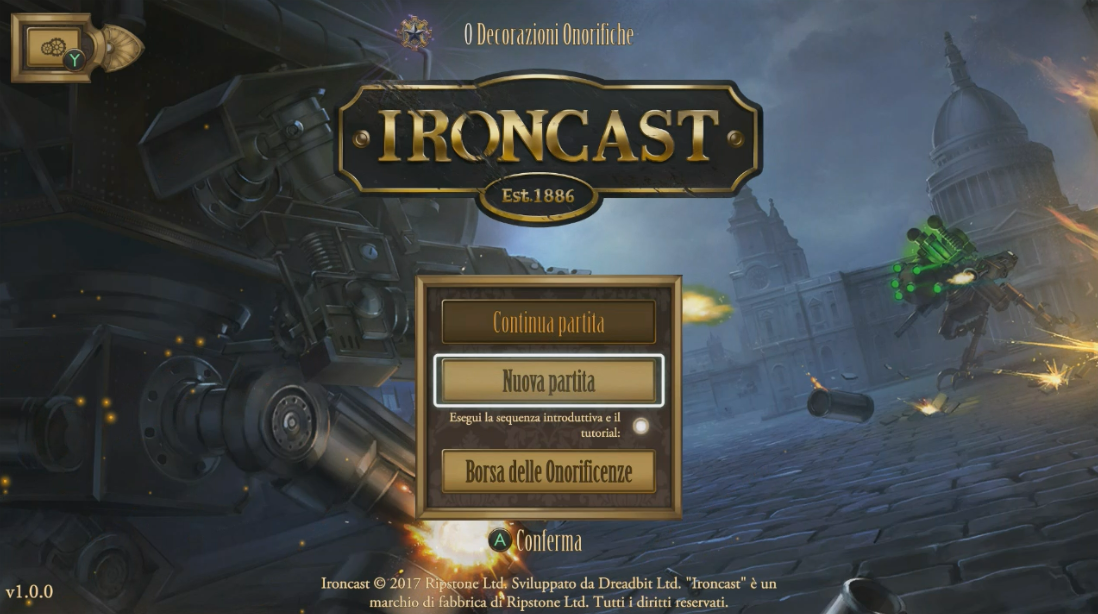 25th July 2017: Since the recent announcement of Ironcast for Nintendo Switch, fans have been eager to find out the release date of the game. The teams at developer Dreadbit and Ripstone Publishing are excited to announce that Ironcast, their first game for the console, will be hitting digital shelves on the 10th August 2017. The game, which is the complete Ironcast collection and includes all available Commanders and Mechs, will be priced at £12.99 / $12.99 / €14.99. Fans can also look forward to a brand new launch trailer in the coming weeks, and can check out the announcement trailer in the meantime to see the game in action: https://www.youtube.com/watch?v=BmPJT5RirlY

Daniel Leaver, Founder & Designer at Dreadbit enthuses “I bought a Nintendo Switch at launch and I was really, REALLY excited about the concept of the console. After playing it for the first time I desperately wanted to bring Ironcast to Switch because it felt like the perfect platform for the game.

With four ways to play, Ironcast fully utilises the array of intuitive playing options on Nintendo Switch. You can play on the big screen with the console docked, in tabletop mode with the Pro Controller, and on the go in handheld mode using either the Joy-Con™ controllers or by taking advantage of full touch screen functionality. With added HD rumble support, taking down the enemy has never felt so good!

Ironcast is a turn-based strategy game set in an alternative Victorian history; where refined men and women command gigantic mechanised war machines, laying waste to enemies of the British Empire. As Commanders of the Consortium of Merit, players take control of their own 7 metre tall walking Ironcast to defend 1880’s Victorian England from an invading force of enemy Ironcast.

Battles are fought by generating resource nodes which in turn drive the Ironcast’s various weapons and systems. Players must choose how to spend these nodes wisely; either offensively to cripple and destroy opponents, or defensively, if they suspect a barrage of incoming weapon fire is due.

The roguelite style of Ironcast enforces that death is permanent, but rewards are persistent and no two campaigns are the same. With randomly generated missions, over 50 unlockable items and the potential for rare enemy loot drops, commanders will face a new crusade with every play through.

Be a hero, join the fight, save your country.

Daniel wished to create a studio that would not have a permanent staff, but rather would pull in the development talent required on a per project basis, coordinating the team and delivering top quality indie games. Much like how the movie industry works today.

With Dreadbit, each new game is a pitch; not to publishers or venture capitalists, but to the developers he trusts. If they can get excited about the concept, then it deserves to be made. The team will come together and work exclusively on that project, one project at a time.

Ripstone® is an independent games label that offers a fairer, better deal to developers. Founded in 2011 by publishing and production veterans, their focus is getting indie games onto the digital stores of home consoles and PC, making sure gamers know about it, and rewarding the talent for it.

A finalist for the MCV Indie Games Label 2016 award, Ripstone has published 15 games including Ironcast, Stick It To The Man, Pure Pool and Extreme Exorcism. At their home in Liverpool, England they also have a first-party development studio, and their stunning first title Chess Ultra launched in Summer 2017.